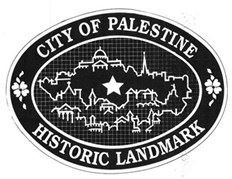 Established in 1846 the City of Palestine features over 1,800 historic sites including churches, buildings, monuments, cemeteries, and museums. The City of Palestine recognizes and has designated three residential districts, The Northside, Southside, and Michaux Historic Districts, and one commercial, the Downtown historic district.

Many individual landmarks, both within and outside of district boundaries, are also designated. Together, these resources tell the story of Palestine's development and explain the relationship of events in the city to the history of Texas as well as the United States.

The broad trends of history are embodied in the neighborhoods, homes, businesses, and industrial resources that continue to compose the core of the city of Palestine to this day. The following maps provide locations of Landmarks and Districts within the City of Palestine. 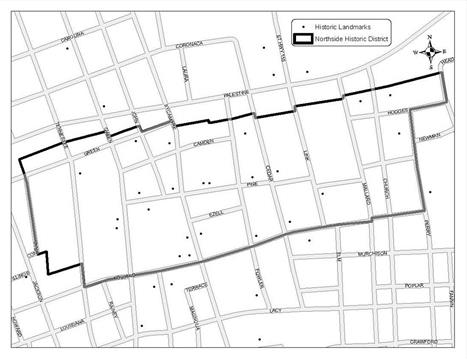 The original settlers of Palestine and long-time residents lived mostly north and northwest of the courthouse in areas called Old Town and north-central Palestine. Most of these people arrived between 1846 and 1861 from other southern states.

Homes in Old Town and north-central Palestine include small, simple one and two-story houses as well as large, two and three-story residences. Built of wood or brick and lived in by early residents, some are examples of vernacular architecture made from locally available materials with L-plan designs or center passage plans, some with Greek Revival decoration. Others were designed by architects with Greek Revival style decoration or Tudor Revival or Classical Revival style design and used massed produced materials.

Examples of all of these types of architecture are preserved within the boundaries of the Northside Historic District, which was designated in 2007. 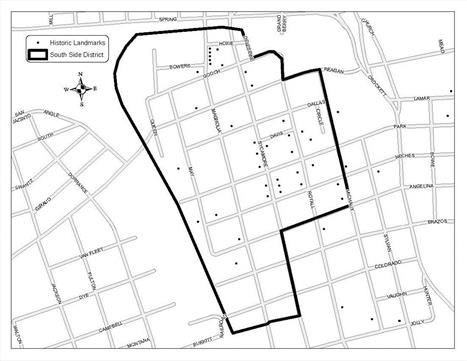 Bankers, lawyers, doctors, architects, carpenters, masons, and merchants settled in Palestine because of the growth caused by the railroad. These residents lived south of the railroad tracks in the area that is now the South Side Historic District. '

Homes built by these residents are large or medium-sized and are made of wood, stone or brick. Many are two stories tall and some are three stories. Many homes in this area were designed by architects in a number of architectural styles including Classical Revival. These buildings were designed and constructed with mass-produced lumber and hardware. Also settling south of the railroad were rank and file workers who lived along the east and north edges of the South Side Historic District, near the railroad tracks. 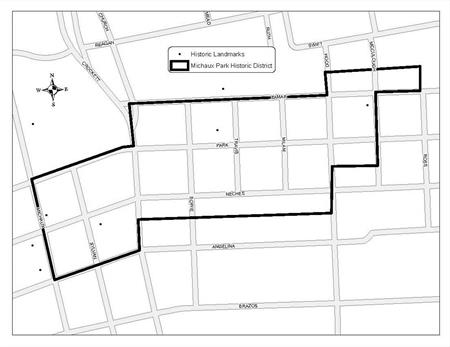 These homes are generally small, one-story wood cottages with little architectural decoration built from massed produced materials. The South Side Historic District was created in 2008 to preserve this historic neighborhood.

The southeast part of Palestine was sparsely populated until about 1915 when new economic growth in Palestine created the need and the means to pay for new housing.

Housing here is mostly small and medium-size one and two-story wood or brick dwellings. Most are vernacular buildings. The Tudor Revival style John H. Reagan School, built-in 1917 at 400 S. Michaux Avenue is one of the most visually imposing buildings in the southeast part of Palestine.

The Michaux Historic District was created in 2009 to preserve the historic character of this predominately early 20th Century neighborhood. 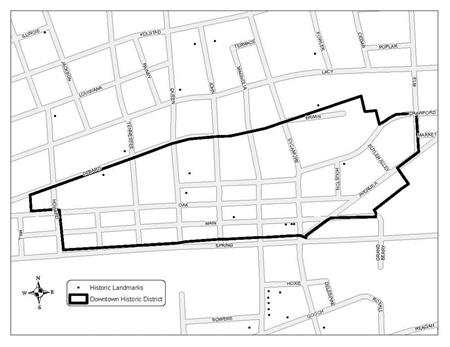 Since the arrival of the railroad in 1872, the commercial center of the City of Palestine has been the downtown area.

Composed primarily of late 19th and early 20th Century commercial buildings, the downtown area referred to as "New Town" by local residents, has always provided goods, services and entertainment to surrounding neighborhoods, as well as the many visitors to the city drawn by the economic opportunities provided by the railroad industry.

The downtown historic district was created in 1992 to preserve this area, and the Palestine Main Street Program assists property owners to promote economic revitalization and growth within this district, which is the historical center of commercial activity and urban life in the City of Palestine. 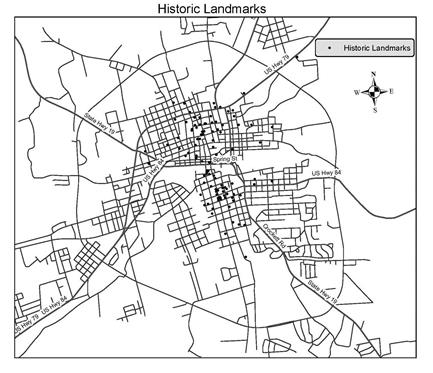 In addition to designated Historic Districts, the City of Palestine designates individual Historic Landmarks, resources that are at least 50 years old and have a historical value due to association with important events, people, trends, or are representative of historic architectural style and/or building methods. Since 1990, over 120 designated Historic Landmarks have been recognized through the efforts of property owners within the City of Palestine.